Let’s talk about breakfast. Why is it sooo many of you don’t eat breakfast!? I guess I can’t relate because hunger comes simultaneously with waking up for me. But still, after all the excessive research (good luck with the thousands of articles there), people still struggle.

{Key high lights of the research include:}

breakfast increases focus and concentration at work and school

breakfast is associated with fewer calories consumed over the day

breakfast can add more energy throughout the day

It’s not really news that when you skip breakfast or wait until the afternoon to eat, you will likely over-eat to compensate for the missed meal. Breakfasts skippers or two-meals-a-day-ers almost always eat more for lunch and dinner or from the handful of snacks in between then they would have otherwise if they just ate a good breakfast.

But let’s talk about the quality of breakfast as well. Say you are in a hurry to get to work, and low and behold sitting right on your counter in front of you is some left over lemon cake from the night before. So you crab a slice and chug down some o.j. (at least you were thinking of Vitamin C). By about 10-10:30 you start to feel a little sluggish. You’re even starting to feel hungry and some unknown gravitational force is pulling you towards the vending machine. The problem here is, although you ate breakfast and got a pretty good amount of calories down, the nutrients in your breakfast = straight sugar. Sugar or simple carbohydrates digest in your body very quickly and leave your stomach empty and feeling hungry in about 2 hours. Typically, when eating a healthy balanced diet, we should feel satiated for around 4 hours post meal. Feeling hungry so soon will cause snacking and/or starving and then binging at lunch.

So what’s a healthy breakfast? Anything that has some complex carbs -which take longer to digest because of the ridiculously long carbon chains- or protein and fat which slow gastric emptying and digestion. It also doesn’t hurt to get some fruits or veggies (yes I said veggies) in at breakfast because if you need >5 servings a day, you better start packing them in! What I really encourage people to do though, is get protein in first thing in the morning. It’s the only way I ever make it to lunch time without collapsing in hunger.

Now that you have some recipes to get you through the week, go out and do it! 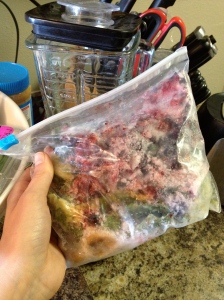 ** cut down the time it takes to prepare your green smoothie- chop up all the ingredients before in individual baggies, freeze, and add to the blender with milk and juice and you’re on your way! 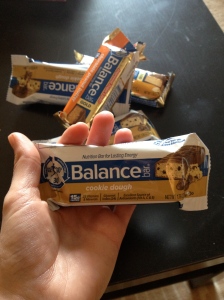 I am pretty serious about my protein bars!

I have been reading this great book and I have been pleasantly surprised that I agree with the nutrition advice. One concept I would like to share today is the 50-25-25 rule.

This rule does 4 important things:

As I continue to blog and break down the three macronutrients I will give you specifics and suggestions and this 50-25-25 ratio will make more sense. This is a teaser post I guess you could say.

I also want to share this chart. This breaks down calorie portions. Again, consider your personal calorie range and keep this in mind for the posts to come!

Nerd alert. This post is going to be a little scientific, so lets get physical (as in lets discuss physiology). And if it’s too much, just skip ahead to the “Take Home Messages” at the end to get a very fast run down of everything that I will now take 10 paragraphs to explain…

Nutrition and physical activity go hand in hand because activity demands carbohydrates and fat as fuel, protein to build and maintain muscle, and vitamins and minerals to support energy metabolism and tissue building. And of course you need water to help distribute fuels and hydrate. 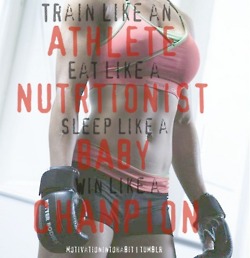 ATP: Stands for adenosine triphosphate. This is a form of energy that is available for immediate use in the body. All energy- yielding nutrients (carbohydrates, protein, and fat) can enter metabolic pathways to make ATP.  Small amounts of ATP are stored in tissues at all times, even during rest, and in the muscles ATP provides the chemical driving force for contraction (think about how often you are moving your muscles, like always). When an ATP molecule is split, it’s energy is released and the muscle cells channel the energy into mechanical movement or as heat.

CP: Stands for creatine phosphate. CP is made from creatine, a compound found in muscles. This compound can split anaerobically (without oxygen) to release a phosphate and replenish ATP supplies. What this means to you is, this is the short term fuel for our bodies. When we participate in high intense boughts of exercise (like a sprint 100-meter dash) our bodies can use CP to produce energy quick and without oxygen. This energy source however usually last for only a matter of seconds. It also acts as a replenishment for ATP. When your muscles are resting, ATP feeds energy back to CP by giving up one of its phosphate groups to creatine. Therefore, CP is produced during rest by reversing the process that occurs during muscular activity.

Are you sufficiently confused already?

Well think of this. ATP and CP are stored in small amounts in your body. If you tried exercising with zero fuel (aka food, energy, calories, however you want to say it) how long do you think your activity would last? Not so long. So this is why it is important to have adequate food and energy stores to perform well. Carbohydrates, fats, and proteins store in our bodies to be utilized during activity.

After you consume carbohydrates, your body stores whatever is not needed right away in a storage form called glycogen. Glycogen is saved or stored in your liver. Your body can then go shopping for energy when you need it. Like when you haven’t eaten for 4 or 5 hours and your body starts needing back up energy, or to sustain ATP production during exercise.

How much carbohydrate a person eats influences how much glycogen is stored. When a person is exercising, glycogen will last depending not only on diet, but also on the intensity of the activity. For example, moderate activities like jogging when breathing is steady and easy, use glycogen stores slowly. But during intense activities, like sprints or races where it may be difficult to “catch your breath, ” glycogen is used up real quick. Usually, a person’s glycogen stores are used as fuel for the first 20 minutes of exercise. After 20 minutes of exercise a person who continues exercising moderately begins to use less and less glycogen and more an more fat for fuel. Have you heard that you don’t start burning fat until 20 minutes into a work out before? Well its absolutely true.

During the first few minutes of utilizing fat as a fuel, your body is calling on free fatty acids circulating in the blood stream. After blood levels fall, the body calls on a hormone epinephrine to signal fat cells to break down and release their stores of triglycerides. Therefore, sustained, moderate activity uses body fat stores as it’s major fuel. So get a good 45 minute to hour work out if you really want to see that fat melt off ya! But in this case, the intensity of the work out also affects the utilization of fat stores, As the intensity of activity increases, fat makes less and less of a contribution to the fuel mixture. A lot of oxygen is needed to break down fat for energy , and if a person is breathing easily during activity, the muscles are getting all the oxygen they need and are able to use more fat. So moral of story, if you want to burn fat, look for activities that require a steady but longer duration. Moderate long distance runs, swimming, and bike rides are good activities. Or any sort of aerobic class or activity that keeps the heart rate pretty moderate.

The longer you train or stick to an activity, the body gets better at permitting the body to draw more heavily on fat for fuel. Also the heart and lungs become stronger and better able to deliver oxygen to muscles at high activity intensities. This explains why sometimes it may take a few months of training and consistent exercising to get your body to start burning fat and to see results. So don’t give up!

Protein is actually not a a major fuel for physical activity. Nonetheless, physically active people need an ample amount of protein in their diets to build muscle and lean tissue. Eating carbohydrates before exercise is needed to prepare your glycogen stores for utilization, but carbohydrate intake coupled with protein after an activity is important to replenish those lost glycogen stores and promote muscles synthesis. Don’t worry, I will dedicate a whole blog to amounts and eating guidelines, but for now it is important to say that it is important to have protein to rebuild muscles.

Only ten percent of the total fuel used during exercise comes from proteins and amino acids, but during activity, muscles turnover amino acids stores much quicker, and protein must be provided at the end of the work out to make sure you have bigger muscles in the end and not wasting ones. Longer work outs, after all the glycogen and fat stores are used, then rely on protein stores. So endurance athletes require the most protein during a work out than any other athlete, even body builders who actually use less protein during an activity. Weird huh?

Getting our plates into shape protein style!

What Men think of protein

What Women think of protein

What personal trainers think of protein

What Nutritionist think of protein

What society thinks of protein

What protein actually is 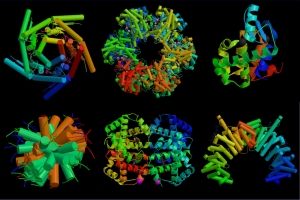 Protein, chemically speaking, is made up of carbon, hydrogen, oxygen, and a nitrogenous group. These compounds make amino acids, which you are probably more familiar with right? There are about 20 amino acids that make up practically everything in your body. Amino acids are what help your body code your DNA, which acts as a blue print to replicate every cell and tissue that amounts to your existence! So these powerful amines are to be taken seriously!

As far as the proteins we consume, it’s important to know the difference between a complete protein and an incomplete protein. Let me give you a little background first…

There are nine amino acids (histidine, isoleucine, leucine, lysine, methionine, phenylalanine, threonine, tryptophan, and valine- incase you were wondering) that your body absolutely cannot make itself-whereas the rest of the amino acids can be created through the break down of other aminos. That makes these amino acids essential aka you have to eat these from food sources. A complete protein is a food source that has all these essential amino acids in it. High quality food sources would be:

It’s really important we include protein in all our meals and snacks to help our blood sugars and rebuild our muscles. You might think that only body builders and teenage boys need protein to rebuild their muscles, but actually our bodies are constantly turning over our protein stores, meaning breaking down and rebuilding. So it is important we consistently and regularly eat protein.

Some tips to shape up your plate: